You need the following tools to install a ceiling fan:

Ceiling fans in your home can be a real energy saver while providing comfort for everyone at lithe cost for the electrical power that operates the Ian. Fans should be set to blow downward in the summer so that the moving air makes you feel cooler. Contrary to popular myth, fans should not be reversed in winter. For high ceilings you may want to set the Ian to circulate the hot air downward.

In choosing a ceiling fan the correct blade span is – critical. The span is the distance from the tip of one blade to the tip of another opposite blade. Thirty-six-inch fans are for rooms up to 9×12 feet. Examples are kitchens, bathrooms, large closets. Forty-two-inch fans are designed for rooms up to 12×15 feet. Examples are kids’ bedrooms, large kitchens, family rooms, and studies. Fifty-two-inch fans are for rooms larger than 12×1 5 feet. Living rooms dining rooms, large porches, master bedrooms, recreation roams, and large family rooms are examples. The number of tan blades can be important in your ceiling fan selection. Most fans have four blades. Others have live or six blades. The additional blades permit a smaller fan to produce air movement similar to that of a larger fan. For example, a smaller fan with more than four blades is similar to a larger Ian with four blades. Consider blade clearance when choosing a fan.

There are three different basic installation configura­tions you should consider:

Downrod. This is the traditional style. The design incorporates an 8-inch (or longer) down-rod the ceiling to the top of the fan motor. The design is tailored to rooms with high ceilings – those over 8 feet. It is an excellent choice for cathedral ceilings. Down-rod units generally have a self- aligning ball hanging canopy. This device lets you I install the fans on ceilings with up to a 45-degree slope or pitch. 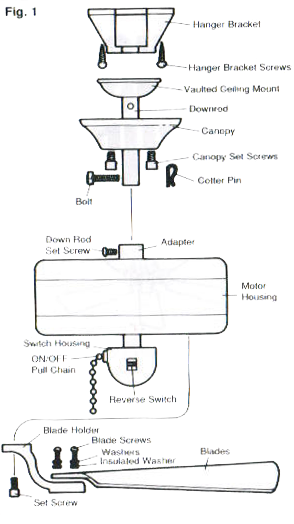 Anatomy of a ceiling fan.

This fan unit is typical of most ceiling fans sold in home centers, building material outlets, and specially stores. Your model may vary slightly. The key to any fan installation is to secure the fan 10 a ceiling framing member. Because of the torque on the fan blades, the framing must be rigid and solid. The hanger bracket attaches to the framing and the tan hooks to the bracket via a swivel or J-hook.