Allen + Roth is a brand of ceiling fan we were not familiar with previously, but while checking what site visitors were looking for while visiting our website, we came across Allen + Roth ceiling fans. Allen + Ross fans are ornate and quite lovely. They have designs that go around the outside of the fan. These Allen + Roth fans have a unique feature which is different from other brands of ceiling fans – some of them have a cage design. A cage design means that you will get more humming from the fan then other types of ceiling fans. This does not mean it is an annoying humming or anything to be concerned about, but it also means another thing as well. 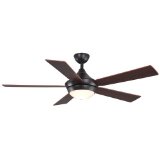 Allen + Roth Aged Bronze Ceiling Fan
Allen + Roth ceiling fans are lovely, detailed pieces like the one you see above. This is a simple design but is still elegant in its appearance. Even though the fans are sold at Wal-Mart, you can still find some pieces which aren’t bad, most certainly! Price points are low and medium, so you won’t wind up spending a boatload on one of these fans or breaking the bank.

A cage design also means that it may be harder to access the fan blades. This can be an advantage and a disadvantage. If you have a pet (like a cat or bird) which comes too close to the ceiling fan, they won’t get hurt by it. On the other hand, if you want to take apart this fan yourself, you’ll have more work to do to get to the blades. With a cage being over the blades operating, it also means that it’s important that the fan does not get bumped while in operation. This is unlikely to happen, but keep it in mind. The cage will protect the blades as well, though. So there are advantages and disadvantages to having a cage design.

Allen + Roth ceiling fans are likely the only ones on this website to have this cage design concept. You can find desk fans for example that have this kind of design, but that is because a fan that sits on the floor or on a desk needs to have something to stop people from putting their fingers into the fan. Children for example could put their fingers into a fan that is spinning and get hurt, so that is why desk fans or fans that are closer to the ground will have these cages. Typically you don’t see these cages on ceiling fans, so that is what makes Allen + Roth fans very unique in their innovation.